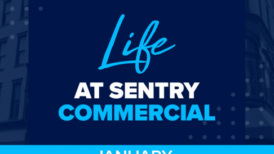 SIOR Inducts Sentry Commercial’s Duclos To 2020 Board of Directors

WASHINGTON, DC – The Society of Industrial and Office Realtors® (SIOR), the world’s leading commercial real estate association, announced today they have installed a new Board of Directors to lead the organization’s efforts for the next twelve months. The new members were sworn in during SIOR’s Fall World Conference, held in Portland, OR, October 17-19, 2019, and will remain in their roles until the end of October 2020, after serving a one-year term. Mark J. Duclos, SIOR, CRE, assumed the role of global president, following his year as the board’s President-Elect. Duclos is currently the president of Sentry Commercial in Hartford, CT and has been an SIOR since 2003.

Patrick J. Sentner, SIOR, took office as SIOR’s president-elect. After serving in this role for one year, Sentner will assume his role as president of the Board in the fall of 2020. He is the executive vice president of CBRE, in Pittsburgh, PA and became an SIOR in 2002.

Patricia J. Loveall, SIOR, took control as the board’s vice-president. After serving a one-year term as Vice President, Loveall will serve as President-elect for a year and then step into the Presidency of SIOR in the fall of 2021. Loveall is an executive vice president and partner with Kidder Mathews in Seattle, WA and has been an SIOR since 1997.

Christopher Curtis, SIOR, took office as president of the SIOR Foundation. He will serve a one-year term. Curtis is currently principal with Nugent Curtis Real Estate in Kankakee, IL.

A complete list of SIOR leadership can be found HERE.

“Since becoming an SIOR over 15 years ago, I have been continually impressed with our members”, Duclos says.  “Our members are not just talented at what they do…they are good people with a commitment to decency and doing things right.  This is an exciting time for commercial real estate, with incredible growth in many markets.  That growth, however, is simultaneously creating fresh challenges.  New technology, e-commerce, shared workspaces, flex-office, last-mile warehousing – they are all creating new demands and challenges across the country.  We believe that SIOR and our members are well-positioned to be the best resource for landlords, tenants, and investors looking for expertise and guidance as we approach 2020.”