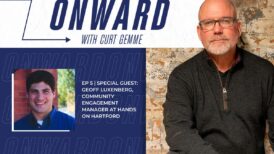 September 23, 2019 – Hartford, Connecticut – Sentry Commercial has experienced steady and continued growth across the Southern New England region in Commercial Real Estate markets. The company focuses on industrial, office and land availabilities, and has been a leading firm in the region since 1990.

The company announced today that it has added to its roster Curt Gemme, an experienced veteran of not only Commercial Real Estate but the Southern New England area. From approximately 1990 to 2001 Gemme worked at Sentry Commercial as the Director of Office Leasing and Investment Sales. During that time, he completed over 150 transactions with a total volume of over $250,000,000.

This tenure was followed by a founding partner and CEO position at Keller Williams of Greater Hartford from 2006-2010. Gemme built an executive team and recruited over 100 agents opening two franchises in Avon and West Hartford. Today, with 5 offices and 450 agents it has become one of the largest real estate companies in Connecticut.

From there, Gemme served as Vice President and Partner of the McLadden Restaurant Group. The new venture met with great success between 2010 and 2016, as McLadden’s became one of the most popular and recognizable establishments in the greater Hartford area, eventually expanding into Northampton, MA and Simsbury, CT. During that time, Gemme led the physical aspects of the enterprise, including construction management, plant operations, and equipment purchasing. Also, of note, Gemme managed human resources including recruiting, staffing, training, and investor relations.

Gemme now brings three decades of experience to the team at Sentry Commercial. His expertise and savvy in areas of marketing, technology, and leadership will build upon Sentry Commercial’s future-focused operation.

“Curt has the entrepreneurial spirit and leadership experience that we look for in our players,” explains Mark Duclos, SIOR, President of Sentry Commercial. “We have our eyes on the big picture for our clients, our partners and our community, and his vision will be a welcome complement to our team.”

Sentry Commercial’s core values revolve around concepts like camaraderie, collaboration, and teamwork. Gemme’s team-building experience will be a strong asset in this realm. Additionally, the firm’s focus on building partnerships around the region and across the country have enabled them to stay competitive amid worldwide players in the space.

Outside of work, Gemme spends time with his three children, renovating property, music, cooking, and staying healthy through personal training and indoor cycling. His energy and enthusiasm will be a positive addition to Sentry Commercial.

Sentry Commercial is a leading independent real estate firm in Hartford, CT focusing on brokerage and advisory, property management, and construction management services. The firm was established in 1991 and served Western Connecticut and all of Southern New England. Their unique partnership approach allows them to serve clients across the country. For more information, visit http://sentrycommercial.com.