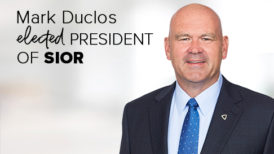 Larry Levere, SIOR, Sentry Commercial’s Director of Office Brokerage, has been involved with non-profit partnerships for a duration of his time as an SIOR. His teamwork with nonprofit partnerships includes the representation of office users/buyers and landlords/sellers. His partnership with the nonprofit, FAVARH, has allowed him to join its Board, eventually furthering as Board President for numerous years.

Listed below are various other non-profit partnerships that Levere has been honored to partake in:

Sentry Commercial values the relationships built within the CRE industry. Our team has found significant importance in partnering with nonprofit organizations, as nonprofits provide critical services to the community while building economic stability. Nonprofits strengthen communities, especially as they come together to build on their legacy and their essential rule to the future. Our team finds it honorable and rewarding to belong to projects that have an impact on the legacy of our community and beyond.